This not so much a herd profile but a story about my Shetland cattle, how they now fit into the farm and how it all came about. Hopefully, it will be of interest and I apologise if I bore.

Having studied agriculture at college my career path veered away from agriculture; over the years I got involved in various business. However in 2010 I was fortunate enough to acquire a farm, a lifetime ambition. At the time of purchase, Intwood Farm was a redundant dairy farm having been turned over to arable production. It is 450 acres of mixed arable and livestock, on the outskirts of Norwich, Norfolk. It is a very special place that includes environmentally sensitive areas of wild orchids and ancient woodland. It also boasts a Site of Special Scientific Interest (SSSI) and is in Defra’s Higher-Level Stewardship scheme.

I purchased my first Shetlands in April 2008 from Tracy St Clair Pearce and that is a story. At the time I had a few Highland cattle and my wife had recently bought me a new Highland bull. I needed a cow simply to keep him company as I was not able to release him with the rest of my Highlands due to a grazing arrangement. So, I was looking for an odd Highland cow to buy. I was unable to find a Highland but saw some Shetlands advertised. At the time I had no idea what a Shetland was, but in my ignorance, I thought they must be akin to a Highland.

So, I set off with trailer in tow to buy a cow. When I arrived at Tracy’s farm, I saw these black and white story book cows in the meadow and wondered where she kept the Shetlands!! Of course, I was soon put right by Tracy, as she “to my surprise” explained that the black and white cows were the Shetlands. After much discussion she persuaded me that a Shetland would be fine with my Highland bull, so I agreed to buy a cow and a calf. Tracy was quite a sales lady and I am a sucker for cattle, so she eventually sent me home with two cows and two calves.

So, my two Shetland cows and calves (one bull and one heifer) were happy with the Highland bull. Come the next spring I was presented with two cross bred calves from the cows and a very rotund looking 15-month-old heifer. Those of you who know Shetlands will of course understand that she was heavy in calf. To my surprise this was confirmed by the vet and she successfully calved at about 16 and a half months old. I had learned a lesson, Shetland cattle are incredibly easy breeders, not only that they appeared almost as hardy as the Highlands.

My cattle numbers increased over the next couple of years with retained heifers and my wife buying me a different breed of heifer for each Christmas and Birthday. I eventually had Highlands, Shetlands, Traditional Herefords, a Belted Galloway, a White Park, a British White and various crosses between them. Realising that I needed to be more commercial I bought an easy calving Polled Simmental bull and used him on all the cows (not heifers), selling the bull calves and retaining the heifers.

The resulting heifers grew into my commercial suckler herd but having noticed how productive and low cost the Simmental cross Shetlands were I decided to increase my herd by buying in some more Shetlands, so in April 2012 I bought eight heifers from Mike Sandison. I continue to breed some Shetlands pure but continue to use a Simmental bull on a fair proportion of the Shetlands. The Simmental x Shetland cows are so easy to get in calf, a trait from the Shetland, and they give plenty of milk to feed the calves. We do not experience calving difficulties with this cross and we can wean a calf that weighs the same as the cow. The crossbred cows make up a significant proportion of our commercial herd. We now use a Limousin bull on the Simmental Shetland crosses with amazing results, producing calves weaned at 400kg from a mother which is half the weight of a more expensive and demanding Simmental cow. The calves from this cross grow really well and we regularly sell beasts finished at 14 months old for around £1200.00. At 14 months the bulls weigh 600kg.

With all the rare breed cows we have been doing this with, the Shetland is probably the best. The reason for that is the Shetlands mature earlier than other rare breeds, and we can calve the cross-breds at two years old. A Highland cross would need to be nearly three years old. So from a production point of view the Shetland gives you that advantage. Most commercial farmers think that I am a bit crazy when I explain my system until they see the result and then they are amazed!!

The system also preserves a purpose for my pedigree Shetland breeding herd, sustaining their valuable bloodlines, and keeping them available for neighbouring farms who need native breeds to graze land covered by environmental stewardship schemes. The Shetland has proven to be a thrifty hardy cow that breeds very easily and has few calving difficulties. They are an important factor in the commercial product and are my “little nuggets of gold”. Some people in the rare breeds world think it is dreadful what we are doing. But I keep making the point that if you can find a commercial application for a rare breed then it won't be rare any more. Otherwise, they just become a museum piece. If we didn't have a commercial use for them I might keep a couple of Shetlands for interest, but I wouldn't have as many as we have now, and I certainly wouldn't be keeping a breeding bull.

The cows calve in late November and early December and are fed maize silage in the sheds until early January, when then they graze stubble turnips on the light land farm. As well as using the farm's 50 acres of grassland in the summer, the Shetlands are used for conservation grazing within environmental stewardship schemes, both on the farm and on neighbouring land.

This year we have built a new butchery in one of the old dairy sheds and we are specialising in meat from rare breed livestock. The COVID virus makes this timely as we deliver meat boxes directly to people’s homes, from the farm’s native cattle, pigs, and sheep. People are becoming more attuned to not just rare breeds, but native-bred beef. It gets right into the global warming situation too. With rare breeds you feed them on grass and forage crops. You don’t pump them full of grain, and there is carbon-storing in the grass, so there is a great environmental incentive to switch to less-intensive cattle farming, which is more suitable to native breeds. Meat from the farm’s native and rare breeds is sold direct to consumers via the butchery, the  three-way commercial crosses – bred by crossing pedigree Shetlands with a Simmental bull, with the resulting heifers crossed again with a Limousin bull – are sold to supermarkets. It is important to find the right balance between commercial and rare breed livestock production.

We started at Intwood Farm with 30 cows and calves and today we have about 300, primarily due to retaining the females born each year. 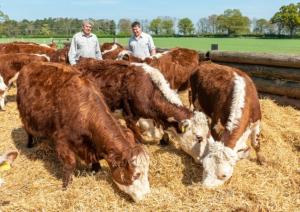 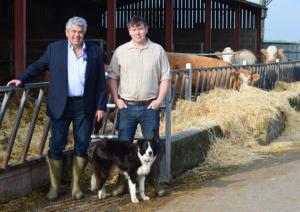 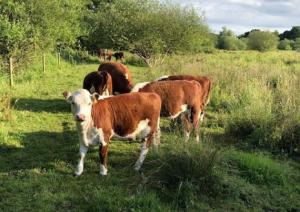