I find it hard to believe that it is 20 years since the Boquhapple herd began in 1998.  West Moss-side is set on the flatlands of the Carse of Stirling right on the edge of the Highland boundary fault looking up to the mountains of the Loch Lomond and the Trossachs National Park to the north and west.  The land of West Moss-side (160 acres) includes part of Flanders Moss National Nature Reserve – the largest raised peat bog in the British Isles.

The ‘good’ ground is Carse of Stirling mineral marine clays laid down millennia ago when it was part of the Forth estuary. It is heavy, wet and difficult to manage, but grows some of the best Timothy hay in the country. In the early days we grew some barley or oats but with climate change that enterprise has become non-viable. The grass fields are in agri-environment schemes for improved habitat for wildlife – especially the farmland waders.  The curlew are hanging on here but are severely threatened by the unrelenting march for grassland efficiency and multiple cuts for silage.   Conservation of both the moss and the adjoining farmland is critical for the health of the bog.

So this is where the cattle are needed. The choice of breed in 1998 led us to Shetlands – they are small and hardy, able to cope with wet and peaty ground throughout the year, preferably have a penchant for rough grasses and regenerating birch, easy calvers, well tempered and easy to handle.  They have been true to this with few health problems. I had to say farewell to one of the oldest cows Evergreen (16 years) this year as on inspection she was found to have lost her teeth. I have their feet trimmed every other year and routinely treat with flukicide mid winter as liver fluke is endemic on this wet, poorly drained ground. Otherwise they are a healthy herd – there is BVD testing every year and Scotland is TB free.

We bought 6 bulling heifers from Mr Webster of Largoward Farm in Fife in November 1998 – with no former farming experience we wondered what we had let ourselves in for! Lorne Amy11, L. Kirsty, L.Marie, L.Arran, L.Rose, and L.Bonnie were all predominately black with some white. Amy had a typical white flash over her shoulder blades and the others were all black, save white tummies and white tips to the tail.   In winter 2003 the herd was split when Steve up-sticks and left West Moss-side for pastures new.  Since then I have introduced just two Shetlanders Trondra Rhona (black and white) and Geldron Tara (red and white) to the herd in 2007.   Since then it has been a closed herd and I have been breeding with a selection of bulls chosen for their genetics, temperament, looks and compatibility with the herd - all thanks to the expert advice of Paddy and the amazing data base.  In 2009 I kept a red bull calf intact. Boquhapple Kelvingrove (dam Lorne Amy 11 and Sire Struihill Zizou) was very special – with old genes and no red genes in the background! He left West Moss-side as a young bull but was later bought back for two years siring 2015 and 2016-born calves. His straws are with SCHBS and RBST as he is seen as an important bull in the history of the breed. Very proud!

In the first four years Steve and I could have been described (and I am sure were!) as hobby farmers as we both had full-time, off-farm jobs and the farming was motivated principally by conservation principles but to be honest the farm was funded by the day jobs!

After a period of serious contemplation of life and the universe in the winter of 2003, I decided to take a plunge.  I gave up the day job (gulp) and set to, to build up West Moss-side as a viable ‘business’. This involved stages of diversification – renovating a steading and hayloft to a beautiful venue for workshops, seminars etc as well as art gallery (2006). Secondly to develop an award winning small eco-glamping site with three yurts together with a commercial kitchen (2010).  (www.westmossside.com; www.trossachsyurts.com).  Most recently (2018) to work with an award-winning chef Andrew Barrowcliffe who has his development kitchen here.

I have included this context/background in the herd profile to share with fellow Shetland cattle lovers because I believe that if we are to see the continued recovery of our special breed they need to have a place in the farming/land management business.  The cattle are the backbone of the whole enterprise here at West Moss-side and in many ways have been the catalyst and the reason for the chosen developments. They are also my best friends and keep me grounded.  Let me explain.

First and foremost the cattle are my conservation grazers – they are an integral part of the conservation management of Flanders Moss.  This is a long-term collaboration project with Scottish Natural Heritage under a 25 year Nature Reserve Agreement. They graze and browse the regenerating birch on the high moss in the summer months. Reducing the birch cover is helping to reverse the drying out of the bog, thus encouraging the peat growing mosses (Sphagnum spps).

Because they are light and hardy they cope with the ground and because they are a traditional slow growing breed they do well on the ‘poor’ grazing. They are contributing to a number of key government priorities – peat restoration/ carbon capture, natural flood management and biodiversity.

In the winter they enjoy haylage from the grass fields. They can therefore be described not only as certified organic, but also conservation grazers and 100% home fed.  So the second key element is the beef production enterprise. All bull calves are kept for beef unless there is something special – such as Kelvingrove.   The steers go to the butcher at between 24 and 30 months. Until recently they have gone to the abattoir just up the road at Dunblane – sadly this has now closed and along with that, two specialist butchers have gone under too.  This is a fact of life these days.  It is hard to be a small, local and high quality producer.    However, as a result of some lobbying, a large slaughterhouse in Perth has been persuaded to take private kills and a new butcher located in Fife. The first two beasts came back in November 2018 and the butcher said “it was a joy to butcher such beautiful beef … it is of the absolute highest quality I’ve seen”.

I sell direct from the farm freezer mainly to locals and to people who come on a workshop or to visit the gallery, or to stay in the yurts. Steaks and burgers and sausages are guaranteed to be on the barbeque!  This summer we have been developing offerings for our yurt guests – ‘Ready meals’ or a fine-dining experience served in the hayloft or outside on the decking - thanks to the chef Andy Barrowcliffe! Andy is using the beef in his cooking which is very exciting, and developing new products too, and so show-casing this wonderful meat.

In the last couple of years I have sold through an online local market (www.neighbourfood.co.uk ). It is one very flexible solution for small producers to get their produce to market. Your produce is bought on line and then picked up from a hub.  In Stirling that is the local High School. I drive to Stirling (11 miles) with the produce (already sold and paid for), and meet the customer – allowing an exchange of farm news with the customer, but also to meet like-minded small producers. There are a number of these markets all over the UK.

Last year the number of breeding females was up to ten, one was not in calf, but the resulting calves were six bull calves to three heifers. That is good news for beef sales! This year I have twelve cows/heifers in calf. The cow which was not in calf last year is not in calf this year either, so I am afraid that she will not be kept for another year! She can be sold either for conservation grazing or she will go to the butcher – tough – but…  Calving will be late spring/early summer. To date there have been 112 calves born here and I have only lost one and have helped only a handful.  I have witnessed less than 50% despite having the expectant cows in the field near the farmhouse. Over the years I have been breeding particularly for the smaller end of the breed profile and with some white. I have also introduced some colour.  The reasoning being that for conservation grazers it is useful to be able to spot the cattle for easy lookering and checking.

Each year I sell some breeding stock in the winter (after weaning) and this year there are two or three in calf cows for sale.  After February all cows are kept for calving.  I have 27 head of cattle 2018/19.  Two years ago I decided that it was time to house all the cattle over the winter (because of the damage to the ground) so a magnificent wooden shed with 3 sided Yorkshire boarding was built with a generous outdoor corral - another response to the wetter climate we are experiencing. So I have my calves in one shed and the adults in the new shed. Depending on the severity of the winter this can amount to at least 7 months.

For the future I hope to maximise the beef production although this will always be limited by the land capability; I hope to keep the old genetic variability and continue to breed animals who are good looking, genetically diverse and sustainable with good temperaments so that the breed advances and is assured a future. 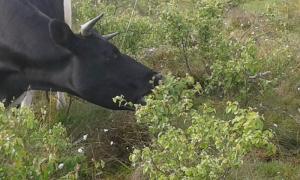 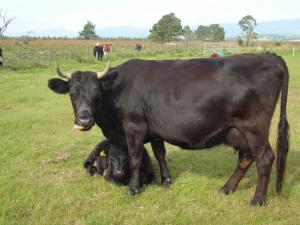 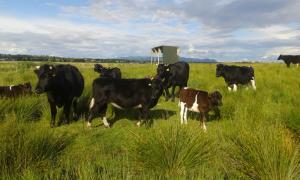 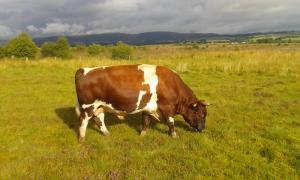 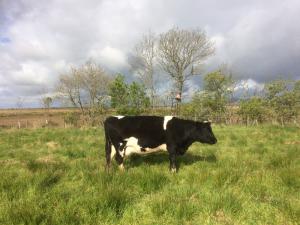 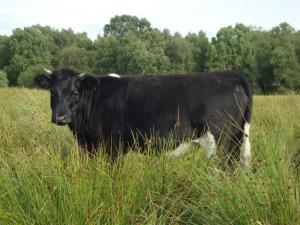 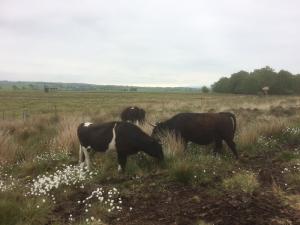 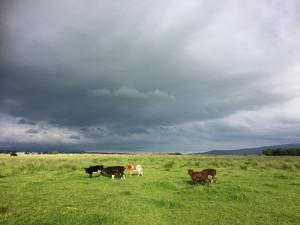 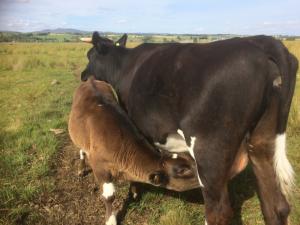 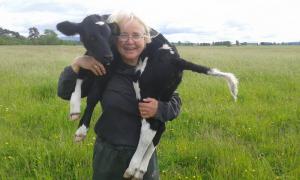 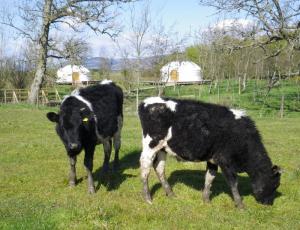 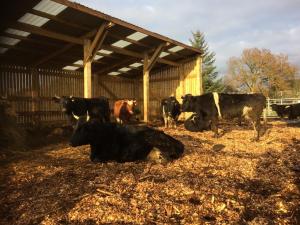