Our involvement with cattle started when we bought our first Shetland cow in 2001. We were interested in keeping rare breeds and already kept Scots Dumpy hens for eggs and bred Tamworth pigs for weaners and meat. We had considered other native rare cattle breeds but decided that the Shetland's size, docile nature and history as a house cow suited our novice status (and lack of a cattle crush!) best.

Our holding is in the Highlands about 10 miles from Inverness, altitude about 500 feet with heavy soil (hard in summer, soft in winter). The herd prefix, Clunes, is the name of the locality we live in and was also our pig herd name.

When we started with cattle we had about 7 hectares, most of which was rough grazing species-rich pasture with the rest being mixed woodland, mainly birch. We used to run our holding on organic principles without incurring the cost of registration. The cattle wintered outside in a birch wood.

Through word of mouth amongst friends and colleagues we used to sell beef in boxes from up to 6 cattle every year. We felt it was more profitable to sell boxed beef direct to customers rather than sell cattle live at livestock markets. This made us price makers rather than price takers. The minimum sale was one quarter beast with some customers buying a side or whole beast and selling some onto their own family and friends. We slaughtered beasts at about 18 months to meet customer demand for quarters which are not too large i.e. about 25kgs boxed beef, to avoid the work involved in over-wintering too many cattle and summer overgrazing.

Eventually persistent difficulties in getting an acceptable beef hanging and butchering service, the sheer work involved and many of our customers reducing their red meat consumption in favour of supposedly healthier pork and chicken persuaded us to stop boxed beef sales. We now keep one beast for our own use and sell the rest live at the market.

Switching from selling boxed beef to selling live cattle was gradually accompanied by the acquisition of about 22 hectares of seasonal grazings on several locations and the purchase of another 3.4 hectares to enlarge our home holding to around 10.7 hectares.

Another change was a switch from breeding pure Shetlands to cross breeding from 2015 when we bought our first Beef Shorthorn bull. This was felt necessary as we believe pure Shetlands will not command sufficiently high prices when sold live at 18 months - and we don't have the space to keep them longer than that.

We had one breeding cow from 2001 to 2004, when our first heifer was born, then 2 breeders until 2011 (each year from 2004 until 2010 we only had bull calves). In 2011 we bought a Shetland cow and 3 heifer calves from Shetland to increase our breeding herd. Since then we have at last bred a reasonable balance of heifer and bull calves.

Unfortunately our first Beef Shorthorn bull wrecked our breeding programme by slowly becoming sub fertile. We had put off some cows which had other issues before we realised it was the bull that was the problem. Our breeding numbers have since been increased by the purchase of 4 heifers in 2018 and 2 in 2019.

Putting our Shetland cows to a Beef Shorthorn bull has been quite successful in producing commercially viable beasts for sale at livestock market. We have sold at weaning about 6 months old and also in the spring after birth at about 12 months but are not yet sure which is better. Earlier sale gives a lower price but for less input i.e. no feeding, housing etc, the other a higher price but for greater inputs.

As we changed to cross breeding and selling live we have slowly become less “organic” and more conventional in how we farm i.e. spraying off docks, and using artificial fertilisers to increase productivity. Our adults are now fed our own silage instead of hay with over-wintered young stock getting some bruised barley too.

Recently we have been given the occasional use of weigh scales and have started using them to enable more accurate dosing for fluke and worms. It is also satisfying to watch young stock growing in weight. 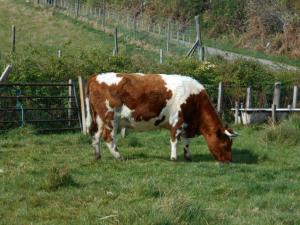 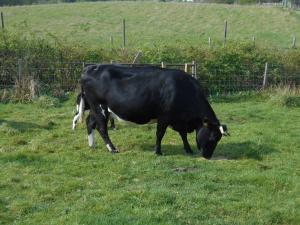 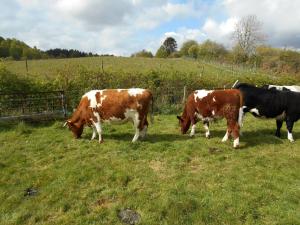 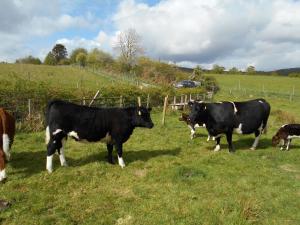 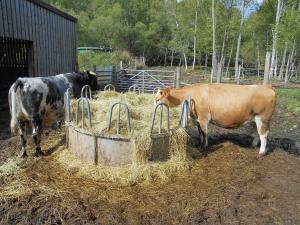 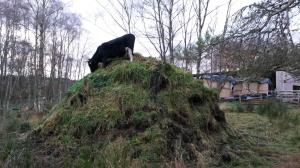 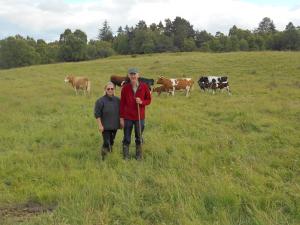