The Fearnag Herd is based in Strathnairn, in the hills to the east of Loch Ness and to the south of Inverness. The scenery is fabulous but the winters can be harsh and the growing season short. Which is why Shetlands are an ideal choice of cattle for this part of the world.

I farm 125 acres comprising a mix of permanent pasture and rough grazing. The farm is split into two sections with 40 acres at Milton of Farr, where I live, and the remaining 85 acres at Tordarroch, about a mile away. I don’t grow my own winter forage. All hay and silage is bought in from other farms. My main focus over the last three decades has been sheep farming, starting with pure Shetlands and then North Country Cheviots. My Shetland sheep were purchased from either Lerwick Mart or directly from crofters in the Islands. But with the introduction of cattle, my flock has been reduced to 130 sheep, about a third of the size of the original flock. So, with Shetland cattle, my connection with livestock from the Island group has been established once again.

Having run my sheep flock for many years, the ambition was to return cattle to the farm after an absence of three decades. So, in April 2016, with much guidance and help from Paddy Zakaria, my first Shetland cow, Carn Bhren Inish, emerged from the trailer as the start of my cattle herd. In a very short time my numbers began to increase and at present, including followers, I now have a herd of 24 animals with four due to calve very soon.

Over the years I had developed a flock of Easycare, wool-shedding, easy-lambing, low maintenance sheep from my original flock. It was therefore a natural progression to choose Shetland as my cattle breed as they match the same general principles as my Easycare sheep flock – hardy animals, low maintenance, easy-calving and productive. Three and a bit years later, I have no regrets about choosing Shetland cattle.

Being an enthusiast for variety, I have to add that my herd does not consist purely of Shetlands. Two of my first cows were cross Shetland/Luing – and they have been fabulous producers. I also have three pure Luing cows and a couple of Belted Galloways – which makes for an interesting (and colourful) combination in my herd. But whatever the breed, the characteristics are the same – hardiness, thrift, temperament and productivity.

My Shetland numbers have fluctuated since April 2016. Of the 13 breeding cattle that I currently have, six are Shetlands. I also have a 12 month old Shetland bullock and of the four cattle due to calve shortly, two are pregnant with pure Shetlands and one will be 75% Shetland.

In my first year (2016) I bred my Shetlands pure to a black bull, Cross Reguill Aaron. The following year I decided to try artificial insemination from a black Galloway bull. My Shetlands calved easily and the bullocks, born in April 2018, have now grown to be impressive animals with excellent size and conformation at 16 months. The downside of A.I. is that you can typically expect a 65% pregnancy rate but, on the other hand, you are likely to have an excellent quality of calf without the inconvenience of keeping a bull on your holding.

In 2018, I used a Simmental bull on my Shetlands and the calves produced in Spring 2019 are of excellent size and shape. I also had some pure Shetland calves from in-calf cattle that I had purchased. The difference between my Shetland calves and my continentals at calving time has been quite stark. The Shetlands were born quickly and running like deer in a matter of hours. My Simmental calves were a bit more sluggish at birth with some coaxing required to get them to suck. But the quality of cross-bred calves from my wee Shetlands has been quite an eye-opener. The extra TLC at calving time has certainly been worth it when you see the size of calves produced. In 2019 my cattle have been running with an Aberdeen Angus bull. It will be interesting to see how that works but I have every confidence that my Shetlands will impress me once again with what they produce.

While cross-breeding Shetlands with a commercial breed makes good economic sense, I aim to use Shetland bulls from time to time to provide pure-bred replacements but also to contribute towards the future viability of the breed. I was therefore delighted to be able to run my Shetland heifers in late 2018 with the excellent black and white bull, Trondra Arrow. While Shetland cattle have made a significant recovery in recent years from being an endangered breed, there is still much to do to keep cattle numbers healthy. So my aim is to try and strike a balance between raising Shetland cattle while also endeavouring to make additional profit by cross-breeding.

To suggest that everything has been plain sailing with my cattle herd would not be true. Some setbacks have been down to my own mistakes (e.g. selling animals that I should have kept). Others have been down to bad luck (e.g. buying cows that repeatedly failed to get pregnant). Nevertheless, the fun bit has been experimenting with various ideas, whether that be trying A.I. rather than putting my cows to a bull or experimenting with different breeds of bull.

Growing up on the family farm I was well used to cattle. But it is something quite different when the herd is your own and you get to make the decisions and do all the planning. The feeling of ownership is enjoyable and fulfilling – but you’ve no-one else to blame when things go wrong. And that mobile ‘phone text you get while on a Greek holiday to say that your cattle are out on the public road can be a wee bit unsettling!

I can – and must – wax lyrical about the positive characteristics of Shetland cattle. But (and I should whisper this quietly) I am not the greatest fan of horns on cattle. All my Shetlands are dehorned (or partially dehorned). Now I can understand that this will put me at odds with some of the purists but I have nothing but admiration for the beauty and grandeur of the classic Shetland cow with a graceful set of horns. It is purely a personal thing. A long time ago a deranged cow with horns did it’s best to kill my father and me while we were trapped in a byre. Fortunately, it failed. I accept that this was an exceptional situation and certainly not typical of horned cattle. But anyway – horns apart – I think Shetland cows are the ‘bee’s knees’.

One of the fascinating things about running a cattle herd is how quickly their family trees can develop. My first Shetland cow, Carn Bhren Inish (daughter of Gillarunna Innes) arrived here in April 2016 and had her first calf in January 2017. That calf, Fearnag Arabella, is now about to have her own first calf any day now (August 2019). Arabella has a fine pedigree. She was sired by Carn Bhren Inuus, the son of St Trinians Balou – that great and colourful patriarch of so many good cattle in the Shetland herd. And to top it all, Arabella is in calf to Trondra Arrow (now deceased) – another fine example of the breed. I truly hope she has a heifer calf.

What are my priorities and prerequisites for my cattle? Well my aim is to have a herd of productive, quality cows with good temperament being vital. I like a close-knit herd with no loners or cows that hang back from the herd. It is important to me that management of the herd is kept as simple and as straightforward as possible so that my cattle are familiar with the farm layout, buildings, handling system and routines. That makes life so much easier. Efficiency and time-saving is important to me, particularly as I continue to hold down my day-job as a quantity surveyor.

And the ultimate key to making management of your cattle herd easier? Yes, its food. The carrot always works better than the stick. I try not to overfeed my cows but there is nothing like a bucket of cattle rolls to keep your cattle compliant and friendly (but always have a length of alkathene plastic pipe to hand to keep them at a safe distance when they get too friendly). If they don’t see you with a bucket you will soon hear them.

Last week I had a potentially serious problem. My herd had pushed their way through a (rather weak) gate and escaped at five in the morning. They could have run riot on the public road, rampaging for miles, causing chaos and havoc in their wake. But no, they all stood calmly and patiently outside my garden gate with the occasional ‘moo’ to let me know they wanted fed! A wee shake of the bucket and they were back in the field again.

If you’ve chosen Shetland cattle then you’ve chosen well. Sometimes they will try your patience – but who would want to be without them? 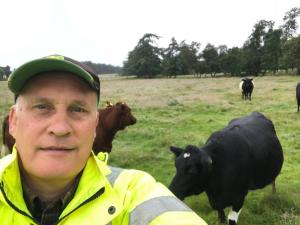 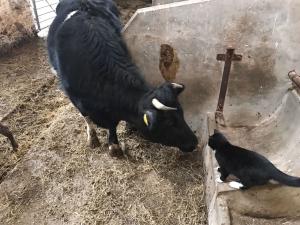 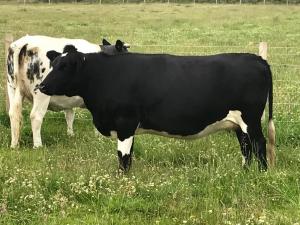 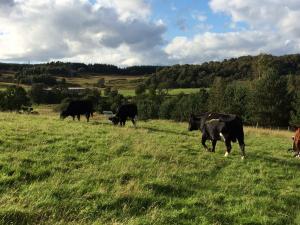 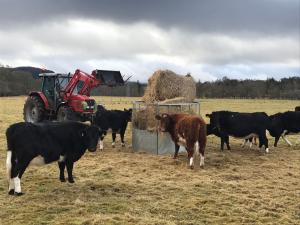 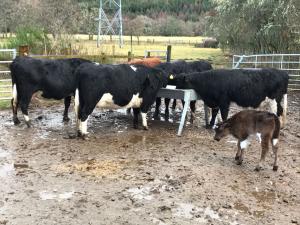 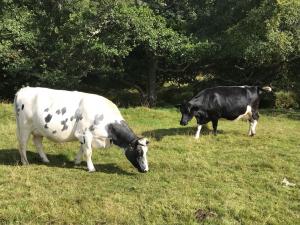 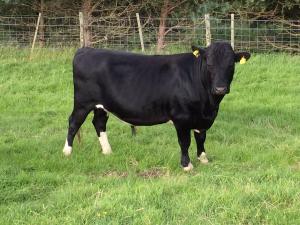 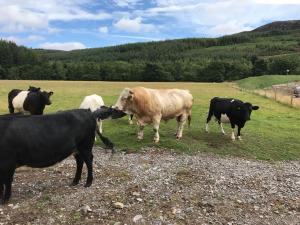 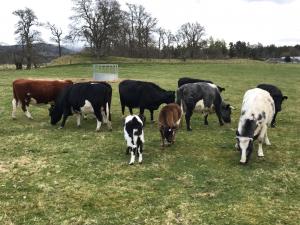 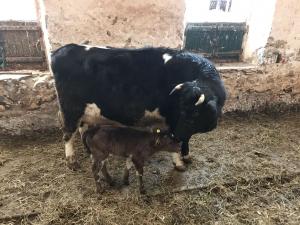 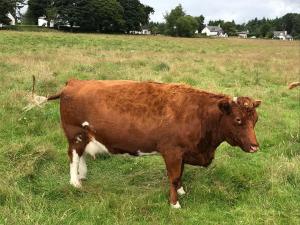 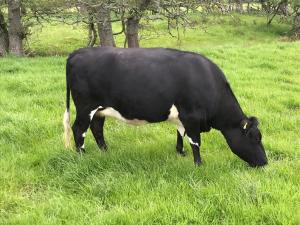 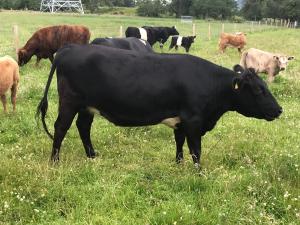 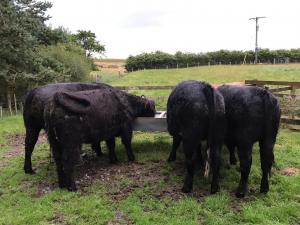 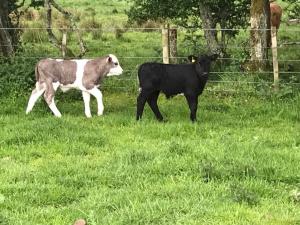 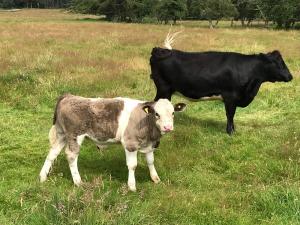 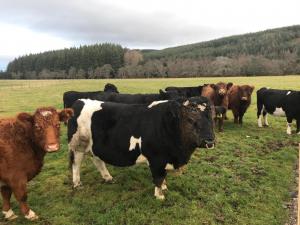 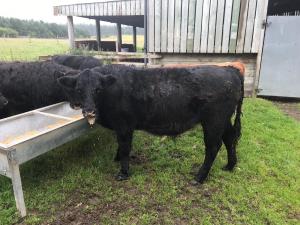 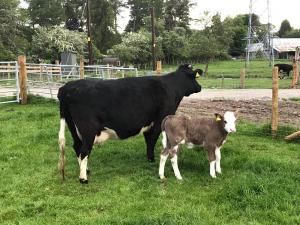