Addie and Margaret Doull bought Islesburgh farm from the Late Johnie Copland in 1970. It takes its name from the broch that used to be there. Addie and Margaret married in September, 1970 and moved into Islesburgh in December 1970. There were three Shetland cows on the farm, fondly referred to as Da Vidlin coo, Sandness and AP.  We also had offspring of a cow that we brought to Islesburgh with us in 1970 as a heifer.

In the mid 80’s, they bought the last three cows of the late Teenie Johnson’s herd, Westburrafirth.   Teenie was an old lady and wanted them to go to a home where they would be looked after. We were honoured to have fit the bill.  We also bought a cow and calf from the late Eleanor Hall in 1988 – Waterloo Dianna and Waterloo David.

Waterloo David was 1st prize calf at the Voe Show in 1988.

Waterloo Dianna was 1st prize with calf, best registered Shetland and overall cattle champion at the Voe Show in 1990. She sadly died on 9th December, 1995, with vet in attendance of staggers.

At a Shetland kye show at the Marts she was first and champion (cannot remember the year). She was 1st prize cow at the Millennium show at Clickamin.

Tamara was selected to be the feature cow at the Shetland Museum and she can be seen there today. We had a taxidermist arrive in Shetland and carry out the process to prepare Tamara for her final home.

We are very compassionate about maintaining the purity of the Shetland breed, and in 1991, we joined the Herd Book.

A few of the bulls used over the years have been – Waterloo David, Waterloo Charlie, Benston Foster, Williamsetter Aero, Hillwell Huxter and Minarvi Nicol. At present we are using Collafirth Bagheera. We have bred several bulls, such as Islesburgh Dexter and Islesburgh Alf, that left their stamp. We breed from our type of cow. Our cows are housed on slats during the winter. They are not halter-trained now, so are de-horned and we aim to have them with neat udders.

We used to show our cattle a lot through the 90’s and early 00’s but not so much in the past few years. 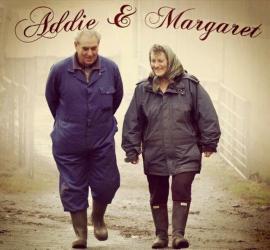 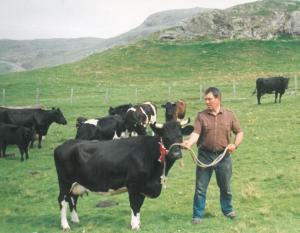 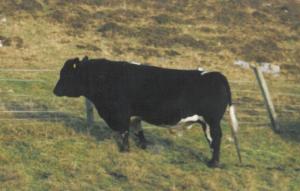 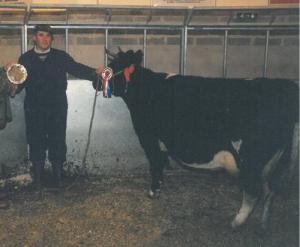 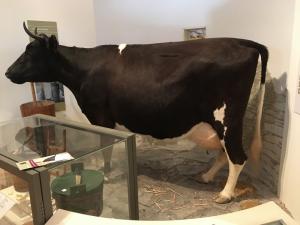